Gray Nicolls are releasing a new range of bats. The Omega XRD 1 cricket bat is already in use by English Test captain Alistair Cook.

The most unique feature of the Gray nicolls Omega XRD is the unique weight distribution in the shoulders of the bat. It is slender shoulders that arrive at a very pronounced "V" point to provide a huge profile for the higher sweet spot on the bat. Gray Nicolls has also realized that by creating this very unique weight distribution through the shoulders, they are able to create a bat with the pick of a bat that is half its size, such is the case with the XRD.

The mid to high sweet spot on the  Gray Nicolls Omega XRD 1 cricket bat make it an ideal bat for easy strokeplay all around the wicket and on any pitch type. Gray Nicolls has invested much time and effort into every aspect of their new bat range. From aesthetics to the grips, everything is highly pleasing and functional. 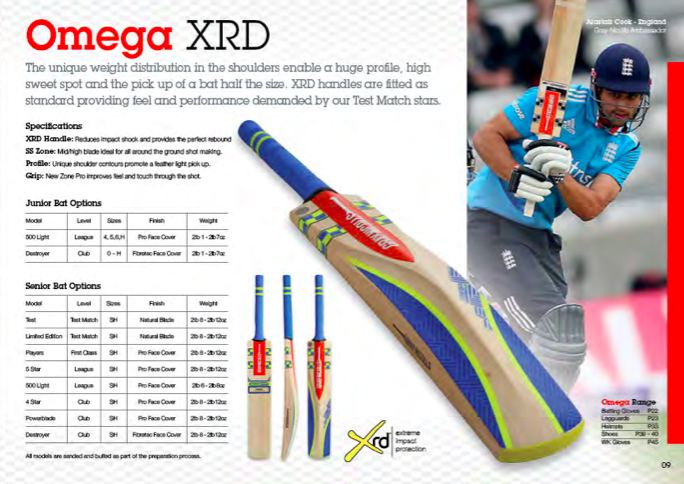 The  Gray Nicolls Omega XRD 1 cricket bat comes with the New Pro Zone Grip which greatly improves the feel and touch of the batsman through the shot. There are a number of variables when it comes to the finishes on the superlative Gray Nicolls Omega XRD. These include face finishes, such as a natural blade face finish or the Pro Face Cover for added protection. The Omega XRD also comes with junior options in what is called the 500 light edition.

The aesthetics of the bat top off the  Gray Nicolls Omega XRD 1 cricket bat perfectly. Traditional Gray Nicolls markings but in a bright blue and luminous yellow, aside from the makers name which is in the traditional red. As mentioned the shoulders of the Omega XRD have a very unique slender contours. This eventually meets at a "V" point at the top of the second third of the bat and culminates in an enormous profile which thins as usual a few inches from the traditionally shaped toe.

For more information on this brand and others just like it please check out the cricket bats section. click here.

To email our support staff with questions please click here.