The Excalibur made by Newbery - Cricket Store Online

Strange Cricket Bats Part 4- The Excalibur made by Newbery

The Excalibur was essentially a bat before its time. It was a cricket bat without shoulders. The bat was made by master English bat makers Newbery. The theory behind the bat was very simple, removing the shoulders of the bat, made the bat lighter in weight and easier therefore to swing at the ball at immensely high velocity.

By shaping the bat with the same size meat as a a cricket bat but with a weight more like a baseball bat, batsmen would be able to slog and hit the big shots with more power. Who needed the shoulders of the bat anyways?

Lance Cairns proved the efficacy of the Excalibur with two cases of some devastating hitting. The one was for Otago as Cairns launched into some ferocious hitting to score 110 batting at No.9. There was more devastation to come from Cairns and his Excalibur bat. During a one day international in Melbourne, Cairns went about butchering the bowling. He scored a 21-ball half-century, including a staggering six sixes in 10 balls. 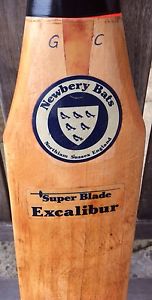 T20 was not yet around at that time. If it had been perhaps the success of the Excalibur would have been more marked. Yet as strange as this bat is, like the Mongoose, the success of the non-traditional cricket bats seems to be very limited.

If enjoyed this blog entry please share it with your friends.