You think you know cricket?! Well then here is one for you, who is the first South African woman to take an ODI hat trick?

The answer is Dane Van Niekerek. The South African T20 opening Batsman was the first South African woman to take a hat trick as she achieved figures of 5/28 against the West Indies.

Van Niekerk started her South African career at the age of 15 as a leg break bowler. The age was no doubt testament to her prodigious talent. It is this talent that saw her transformed into a formidable all rounder with a knack of picking up wickets in clusters as she is the only South African woman to have two ODI 5 wicket hauls. She has made her mark with the bat too, in late 2014 playing against Pakistan in the World T20 Van Niekerk and Lizelle Lee heaped misery on the Pakistani bowlers as they cruised to an unbroken stand of 163. Van Niekerk achieved her top score of 90* during that partnership. Van Niekerk has quickly stamped herself as a classy all-rounder for the South African Women's cricket team in Tests, ODI and T20 matches. No small measure of her cricketing stature when you consider that Van Niekerk is still only 22. 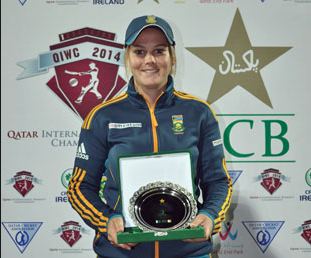 Excellence has a way of gravitating towards excellence as for the remainder of the 2015 and 2016 seasons, Hammer Cricket has announced that they will be Van Niekerk's equipment sponsor.

Like Van Niekerk, Hammer Cricket Equipment is making its mark on the game for its all-round performance. The wide range of professional level cricket bats offered by Hammer has become the toast of many professional cricketers. Hammer Cricket Bats are known for their performance and high quality manufacturing. Hammer cricket bats are made using computer aided manufacturing and real player advice to ensure a pristine product built with what cricketers want in mind.

Hammer's line of cricket bats offered to sponsored professionals like Van Niekerk and other cricketers through the Hammer Cricket website are complimented by a complete range of softs, including pads, gloves, kit bags and wicket keeping apparel.

As women's cricket gains popularity through exciting talents like Dane Van Niekerk, Hammer Cricket is proud of a quality cricketer that is sure to enjoy the use of quality cricket equipment.