There could have been few less celebrated opening partnerships than Hampshire's Gordon Greenidge and Barry Richards. They were two of the finest batsmen to have ever played the game of cricket. In June of 1973 though, Barry Richards did something quite astonishing and it had nothing to do with his exquisite batsmenship. 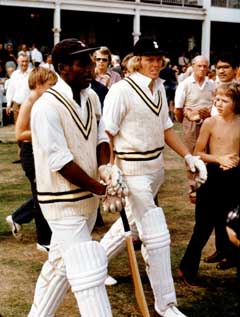 It was a regular John Player League match against Sussex at the United Services Recreation Ground and Barry Richards strode to the crease wielding a bright orange bat. Like so many of the strange bats to have graced the game of cricket, the color of the bat had nothing to do with the performance of the bat, but was merely a marketing ploy.

Graham Roope, who was obviously quite excited with the idea of a colored cricket bat, went ahead to threaten and state that he was going to bat with a blue cricket bat at the forthcoming Test match against the New Zealenders at Lords.

The MCC was quick to quash his ambitions though as they stepped in to put an end to the threat of non-traditional natural willow colored bats gracing the game of cricket.

However, the records will state that Barry Richards did come out to bat with a bright orange cricket bat and it wasn't a Fusion Skyer.

If anyone can find an image of this " orange bat " please send it to me or send me the link. thanks.