Perhaps the strangest cricket bat to have ever graced a professional cricket filed was Dennis Lillee's ComBat. The uniqueness of the bat was that it was made out of aluminium as opposed to the traditional willow. It was said that making the bat out of aluminium would bring down the prices of bats and create a fair amount of irritation for the opposition. 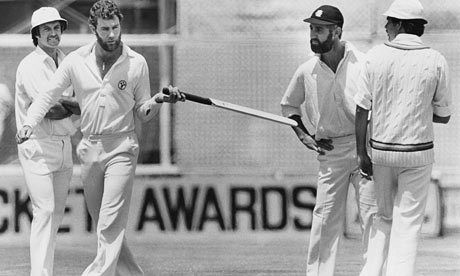 The ComBat did not last long enough to make any dent in the price of cricket bats on the market, it did however irritate the opposition enormously. Lillee used the bat against the West Indies and then in the 1979-80 series against England he came out to bat with it again. English captain Mike Brearly protested the fact that the bat was not made from willow. A stand-off then ensued between the batsmen, the fielding team and the umpires. It was deemed that the ComBat was illegal for play and it was quickly outlawed by the games rule makers.

Lillee was quick to show his utter displeasure at the fact that the umpires had disallowed from using the bat and he hurled it from the pitch towards square-leg. Needless to say sales for the ComBat aluminium cricket bat plummeted and never again has an aluminum cricket bat surfaced again.

It may not be worth much as a batting tool, but as a piece of rich cricketing history, the ComBat is a bat that would be prized in any cricket fans collection.

Stay posted for more strange cricket bats to have graced the great game of cricket over the years.