The Bowler Who Wished He Was Hit for Six

Here is a cricket story legend that is almost as old as the game itself:

The year was 1893 or 1894. Western Australia was taking on Victoria. The game was obviously not played at the WACA or at the MCG because there was a large Jarrah Tree in the field. The bowler delivered a delivery that the batsman hit the cricket ball into the branches of the Jarrah Tree.

The batsmen set off to run assuming that the ball would come down. The ball did not come down and the umpires did not call a dead ball. So, what must have been a pair of very fit batsmen continued to run between the wickets, accumulating many runs. The fielding team eventually launched an appeal for "lost cricket ball".

So, as the batsmen continued to run, the umpires went to inspect the position of the cricket ball in the tree. The umpires declared that the ball was clearly visible and hence denied the fielding team's appeal for "lost ball". The batsmen ran some more. 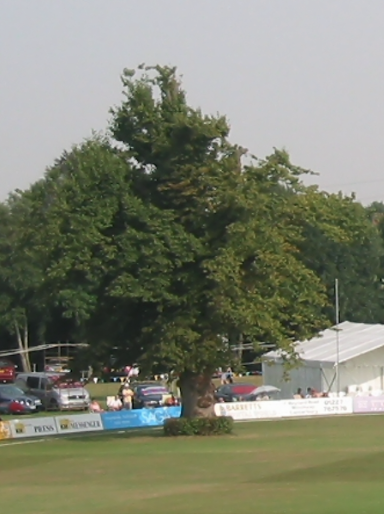 The field that had a tree in the middle of the field also had an ax in the shed. The ax was brought onto the field. This was to no avail. The fielding team were getting desperate as they watched the batsmen pile on the runs. The fielding team brought out a shotgun. They may have wanted to point the shotgun at the umpires who deemed the ball still in play but instead they tried to shoot the ball out of the tree.

The shotgun worked and after a few blasts the ball came falling down into the field. The ball was retrieved and hurled into the wicketkeeper. As the wicketkeeper gathered the ball, the batsmen rested on their bats having completed 286 runs in one scoring shot.

Whether the details of this cricket legend are true or not, nobody will ever know but one thing is for certain, the poor bowler must have wished that he was hit for a six.