Hammer Cricket is known to be and up and rising brand on the cricket equipment scene. Great brands are often wielded by great players. Hammer cricket definitely has a star in the making. 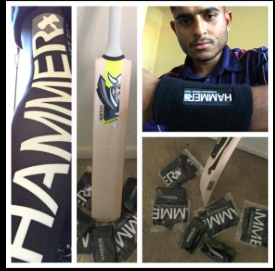 Playing Malaysia in the ICC WCL Divison 3 Cricket Match, Bhatti strode to the wicket with his Hammer cricket gear with the score on 124/7, a fair spot of bother to say the least, this was with 44 overs having being bowled already. The run-rate was sluggish and the fall of wickets was constant.

Bhatti made a mockery of the think tank that put him at number 9 in the batting order as he smashed an uncomplicated 42 off 21 deliveries using is handcrafted custom made HAMMER Cricket bat. He departed a mere 5.1 overs later but the score was by then a far more respectable 179/8.

On his way to 42 Bhatti cleared the rope on two occasions with two great sixes and elegantly stroked three fours.

Malaysia went on ti win the game by 5 wickets and 10 balls to spare. It is fair to say though, that without the contribution of Hammer superstar Adil Bhatti that margin would have been far bigger.