In this current series between England and India, there has been a well documented spat between Ravindra Jadeja and James Anderson. It is unfortunate that Stuart Broad landed up with the broken nose. No, he did not get hit by a stray fist, but rather, a well directed bumper from Varun Aaron. The question is though, where was his protection?

In the past 5 years, helmets have been available in many shapes. Each shape comes with a lengthy explanation from the manufacturers as to why it is a better option than the previous. But when put to the test, the results are always the same. Players getting hurt, bleeding, rattled, and in some cases concussed.

Masuri is one of the so called best helmet on the market. Majority of our beloved professionals use this headgear. However time and time again, it has been proven to be unsafe. Craig Kieswetter, one of Englands wicket-keepers and a T20 specialist opening-batsmen was recently floored while playing for Somerset in the English County League. The ball penetrated between the grill and the peak, and Kieswetter was rushed off to hospital.

So unsafe is the Helmet that Masuri stopped selling it completely, removed it from their website and you can no longer buy this helmet that masuri sold internationally for over 10 years. 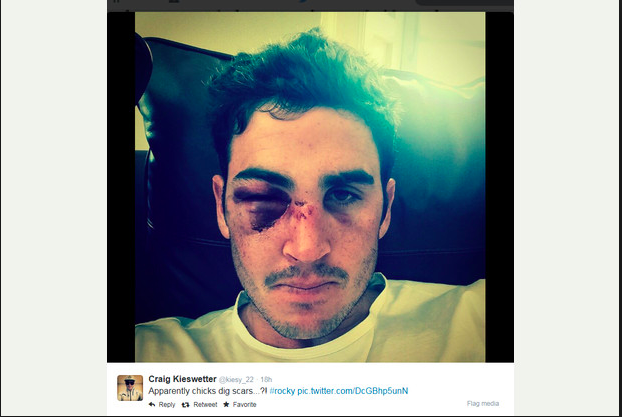 An unknown Indian Company ( who apparently manufactured the helmet exclusively for Masuri, SHREY ) now sells the exact same unsafe helmet as its own. 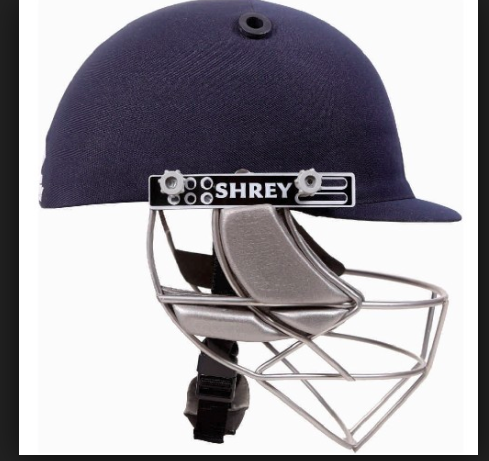 The Shrey helmet is the type of helmet Kieswetter was wearing and isn't stupid proof like the Masuri Vision series.

If it happened once, it could be shrugged off as a freak accident. But this is not an isolated incident. Brendon Mccullum of New Zealand suffered similar fortune. As did Jacques Kallis and Gary Kirsten before him, along with others. The BSI have raised the standard and Masuri have come out with a new helmet. There have yet to be major incidents with the new helmet but time will certainly tell. 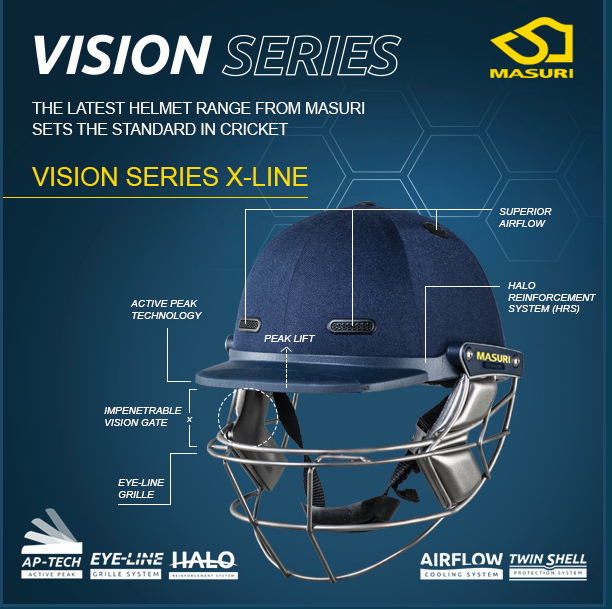 The important section of this image above with regards the new Vision series of helmet from Masuri is shown closer below. Its says IMPENETRABLE vision gate. 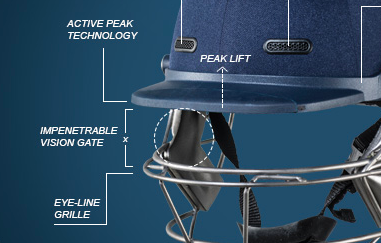 Another very important thing is that the grill is not adjustable. Humans are stupid. If they can take a safe helmet, adjust the grill so its no longer safe they will do do. So kudos to Masuri for not allowing humans to be stupid.

Just when we though humans couldn't be more stupid, if its not moving the grill into an unsafe position Shoib Malik took stupidity to new heights recently when he cut off the vertical supports of his grill ( probably to improve the vision on his Masuri Grill .) Masuri offer tow grills on their new helmets, An expensive Vision series and a cheaper model which will probably allow the ball through. Well Mr Malik took his cheaper club grill and look what he did to it. \ 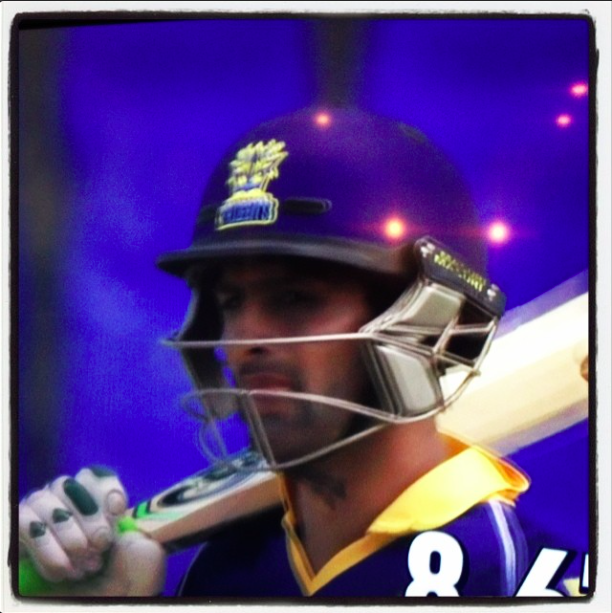 What is he trying to do? Protect his chin? He would of been better off heading out to bat without a grill. That wouldn't stop a ping pong ball.

Obviously the dilemma for manufacturers is that they need their helmets do be almost bullet proof - nothing should be able to penetrate them. But at the same time they need to make sure they are not hindering the batsmen's ability to see the ball in any way.

Ayrtek came up with a helmet that supposedly was the "safest helmet on the market". The helmet is supposed to be one of their finest work. Giving batsmen maximum vision while at the same time stopping the ball from penetrating between the grill and peak. This has been proven on a number of occasions with video evidence. Here is a clear case where the difference between a concept and reality.

Masuri that has fallen short, albion has faired very well. Their Ultimate 98 helmet has been widely used internationally with little incident. There was the time when Andrew Strauss had to be stitched up after taking a blow to the ear, splitting it open. He was an unfortunate target of yet another bouncer. This one rearing up at him and going UNDER the helmet and knocking his chin.

The helmet Stuart Broad was wearing SHOULD have stopped anything and everything, but it didn't. The ball went straight through and crushed his nose, rendering him unavailable for any future part of that game as well as from picking up his Man of the Match award.

Marcus Charman of Affinity Cricket came out with this to say about his preferred choice of helmet, The Ayrtek / Adidas Rawtek Titanium.

We have always stated we will only wear an Ayrtek helmet as we have felt it to be the safest on the market. I use one myself after being hit in the grill of another helmet manufacturer and the grill bar sticking in my chin.

The recent footage of Stuart Broad being hit after top edging a quick delivery has made us reflect on what we know rather than speculation.

We know that a previous generation helmet worn by Craig Keiswetter has failed to stand up to a bouncer and left the player in hospital. A mid 80mph bouncer that made it's way into the helmet.
The same type of short delivery seen below was Keith Barker being pinned by Somersets Alvaro Thomas. The results are very different.

The recent footage of Stuart Broad indicates one major difference in that the top edge helps accelerate the ball into the helmet. The fact he has walked away from this is amazing.

There is one major difference between Stuart broads hit and Craig Kieswetters...to me its all in the after photo. At the top you saw the latter and his face was a mess, below is Broads, and i guess the question is which do you want to be? 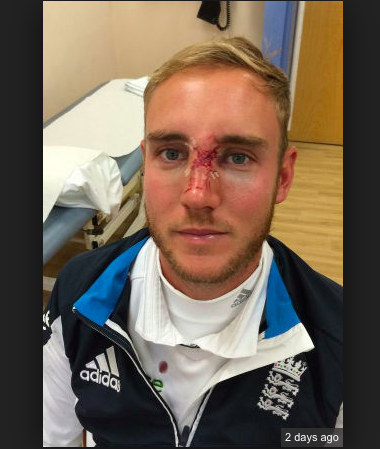 It'll divide opinion not only through whats has been seen but with allegiances to age old designs and brand loyalty.

With that in mind we will stick to what has worked for us and continues to do so. In Ayrtek we trust.

I would also like to state with this in mind that I personally wear the Ayrtek ACIS pump up Rawtek helmet and its the best, safest helmet I've ever worn and don't have any plans on changing and time soon. Its my helmet of choice.

I think the fact that The Ayrtek / Adidas helmet has shown us that at whatever speed it will allow a ball to penetrate we now wait and see till a few players who wear the Masuri vision helmets to be hit in the face and see if its really IMPENETRABLE.

In my opinion all helmets should be made so that the grill is impenetrable regardless of price. Thats the way to go.

So are helmets really safe? Or do they just give the batsmen the illusion of being safe and allowing them to play more confidently? It is true, many times cricketers display the attitudes and characteristics of warriors. But no warrior goes into battle with faulty armor. So again, are helmets safe?