Blizzard smashed an unbeaten 78 from just 48 deliveries to steer his side to a daunting total of 185 and give the Hobart franchise a first win of the tournament with an over to spare.

Despite losing the toss and being asked to bowl first, the day began brightly enough for the Hurricanes as Ben Hilfenhaus picked up the key early wicket of Hashim Amla (8) in just the second over.

Omphile Ramela was next to go, with Doug Bollinger finding his stumps – though not before some spectacular hitting from the left-hander, going 6,4,6 from the three deliveries preceding his dismissal.

Richard Levi (42) and Dane Vilas (25) then combined to continue the assault, as the Cobras fairly flew along at around 10 an over.

Hurricanes, fielding four seamers with Ben Laughlin and Joe Mennie supporting the new-ball pair, actually turned to spin as early as the fifth over, and Xavier Doherty proved reasonably economical (0-29 off four) if generally unthreatening.

Laughlin made the next breakthrough, removing the dangerous Levi as the Hurricanes looked to stem a run rate that was quickly spiralling out of control.

As it so often does, one wicket led to another and suddenly four had fallen for 45 in the middle overs.

The result was a loss of impetus for the Cobras, who at 6-132 looked destined to fall below the sort of lofty total they’d been threatening all along.

Yet that was to discount the impact of seventh-wicket pair Robin Peterson (25 not out off 14) and Vernon Philander (32 not out off 14), who massacred the Hurricanes attack at the death to the tune of 52 runs from 24 balls, seizing back the initiative and ensuring a huge total for their side.

BBL|03 leading run-scorer Ben Dunk didn’t have a Caribbean Premier League series to remember but the opening batsman looked intent on making up for lost opportunities as he launched into the Cobras attack.

Dunk raced to 50 from just 30 balls, at one point carting spinner Peterson for four consecutive fours as Cape must have thought twice about their decision to include four spinners in their line-up.

The first wicket followed the trend the Hurricanes themselves had set, as Charl Langeveldt found the middle peg of Tim Paine (7) who, until that fifth over, had played virtual spectator to the Dunk show being played out at the opposite end.

But after being joined by new signing Blizzard, Dunk (54) holed out to long off from the bowling of Sybrand Engelbrecht, exiting the scene with a mountain still to climb for the Hurricanes.

Engelbrecht doubled his tally in the wickets column soon after, as Pakistani Shoaib Malik (8) came and went in a hurry, he too skying a chance that was easily held by Philander.

Travis Birt (7) enjoyed a life shortly after his arrival at the crease, sending a chance out to deep extra cover that was spilled after failing to get to the pitch of a Justin Ontong delivery.

But the left-hander failed to heed his lesson, picking out a fielder at backward square to give Engelbrecht his third wicket.

That left the equation at an improbable 64 required from 34, with six wickets in hand. 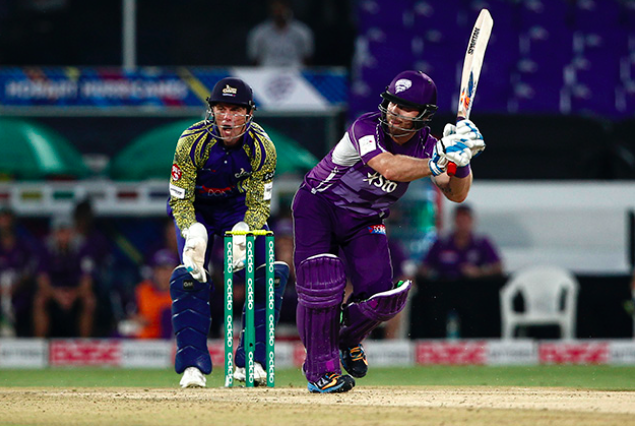 Having shown some form in the initial stages of his innings, he stepped things up a notch by passing 50 with a six – but it was the next delivery upon which the match swung.

That delivery came in the form of a Philander front-foot no-ball, from which Blizzard had been dismissed, and the left-hander made the most of his life.

He sent the free hit over the ropes and, together with new arrival Jonathan Wells (17 not out from 10), took 24 from the Philander over.

Another six each and a couple of singles put the Hurricanes within touching distance of the target, and Blizzard fittingly finished the job by clearing the ropes one more time to give his side the win with, amazingly given the earlier scenario, one over to spare.

Take a look at some cricket gear, No Tax for Aussies. Click Here.